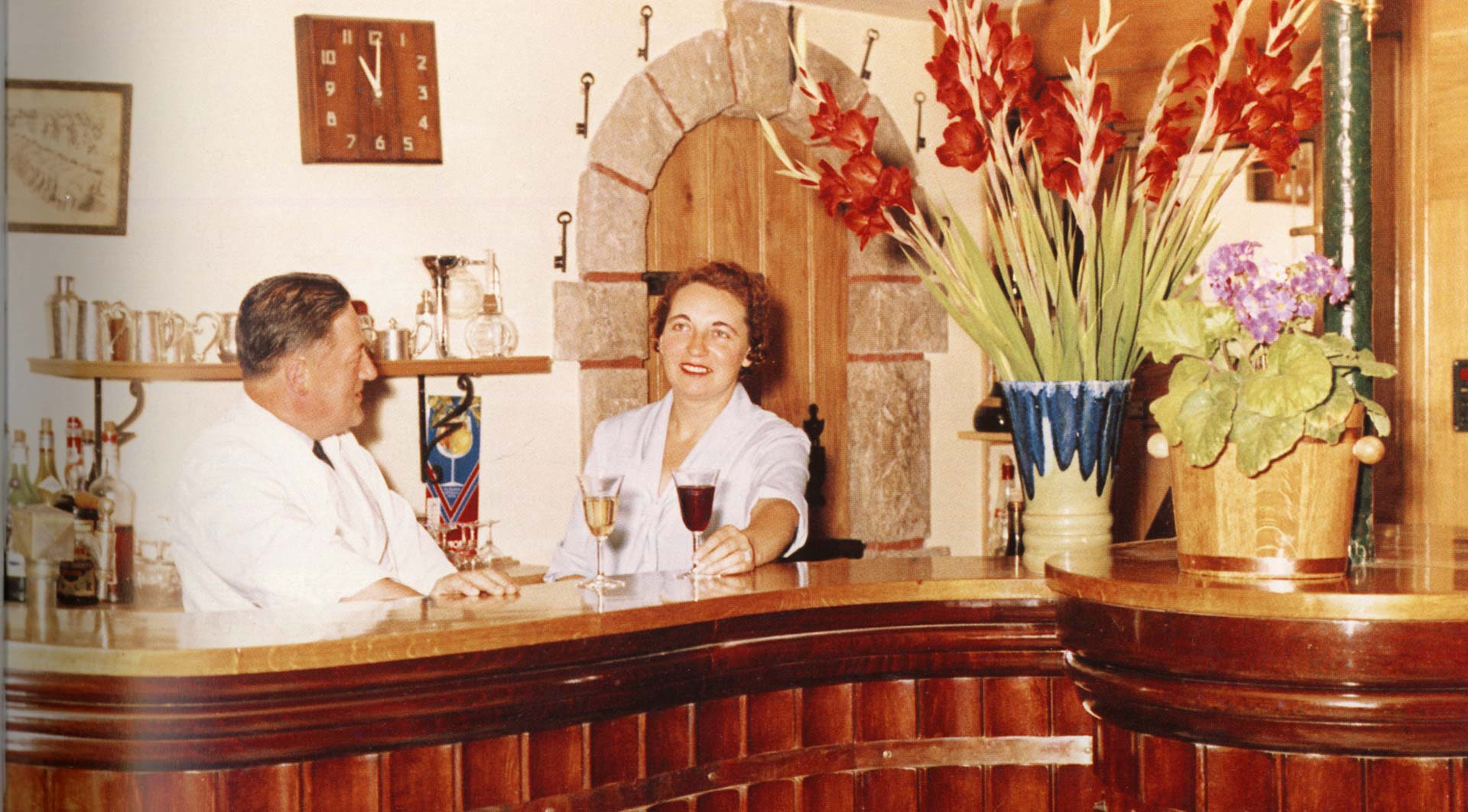 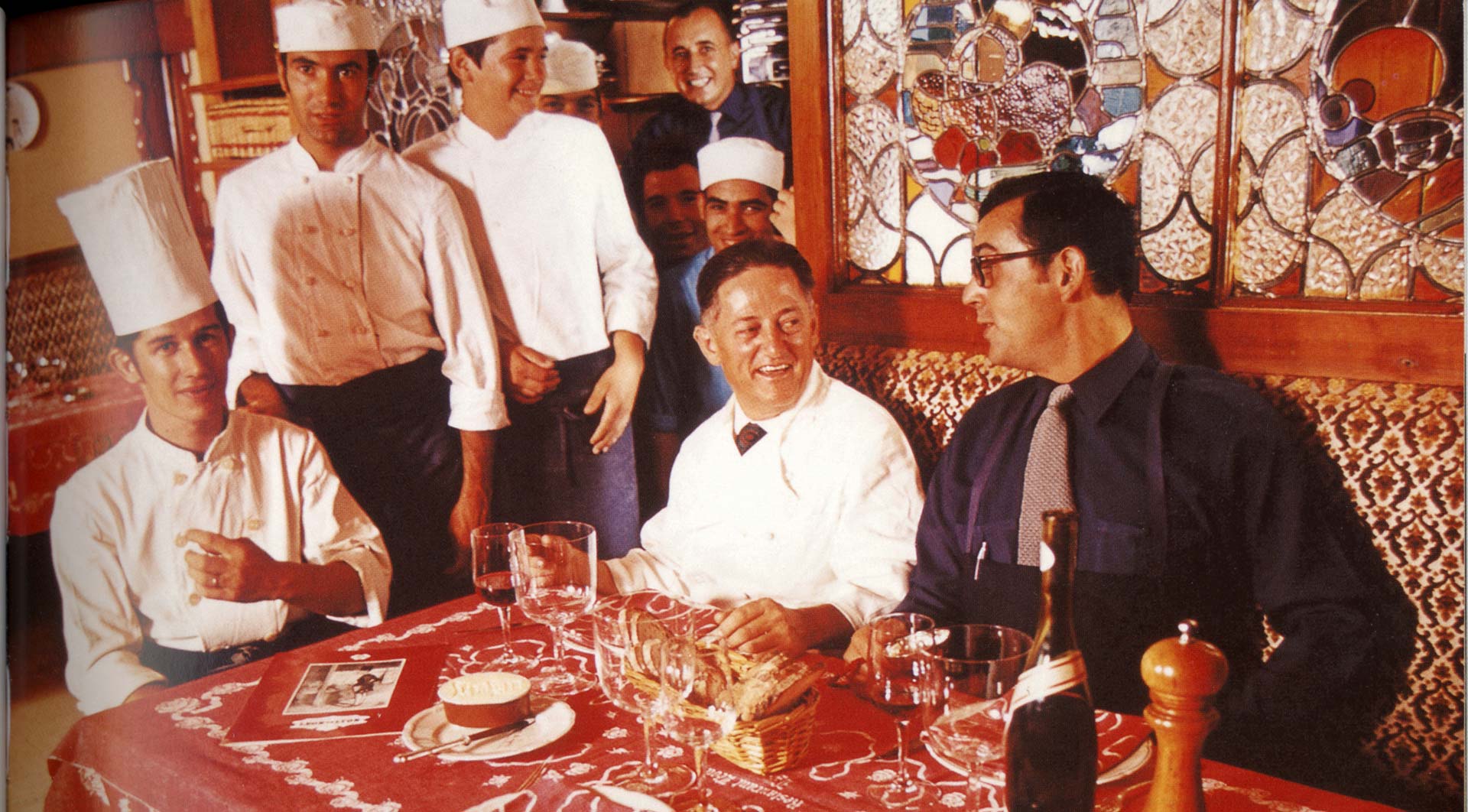 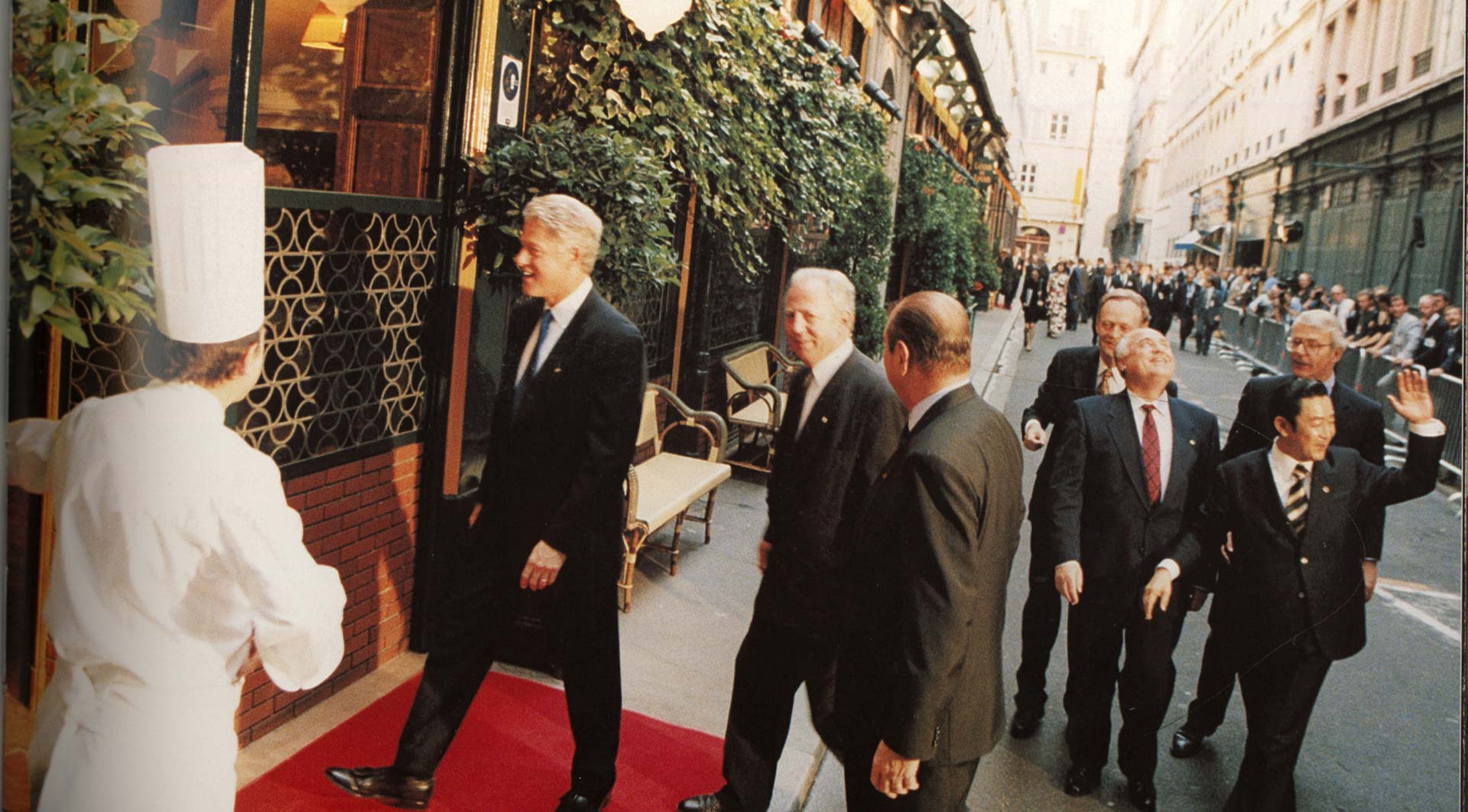 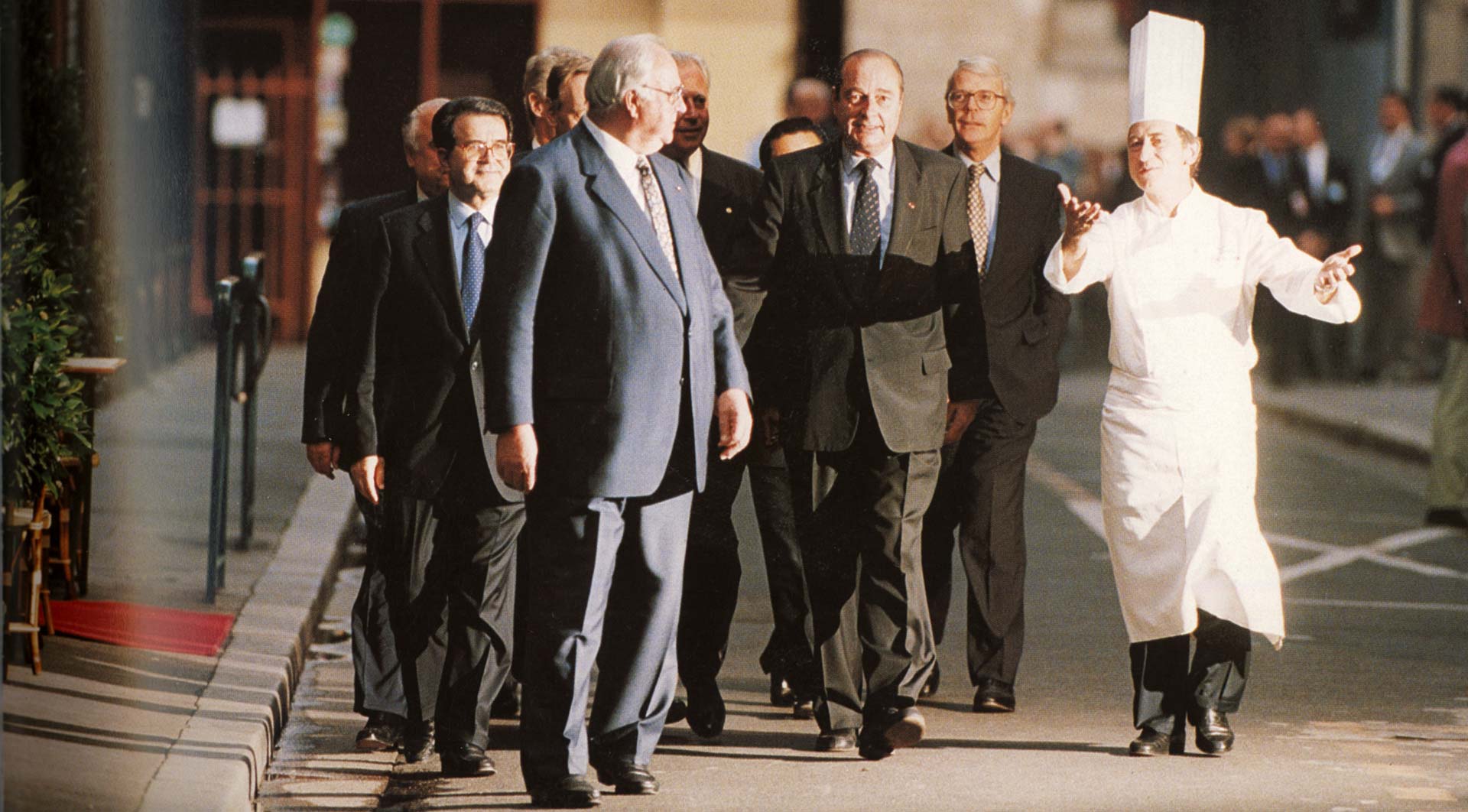 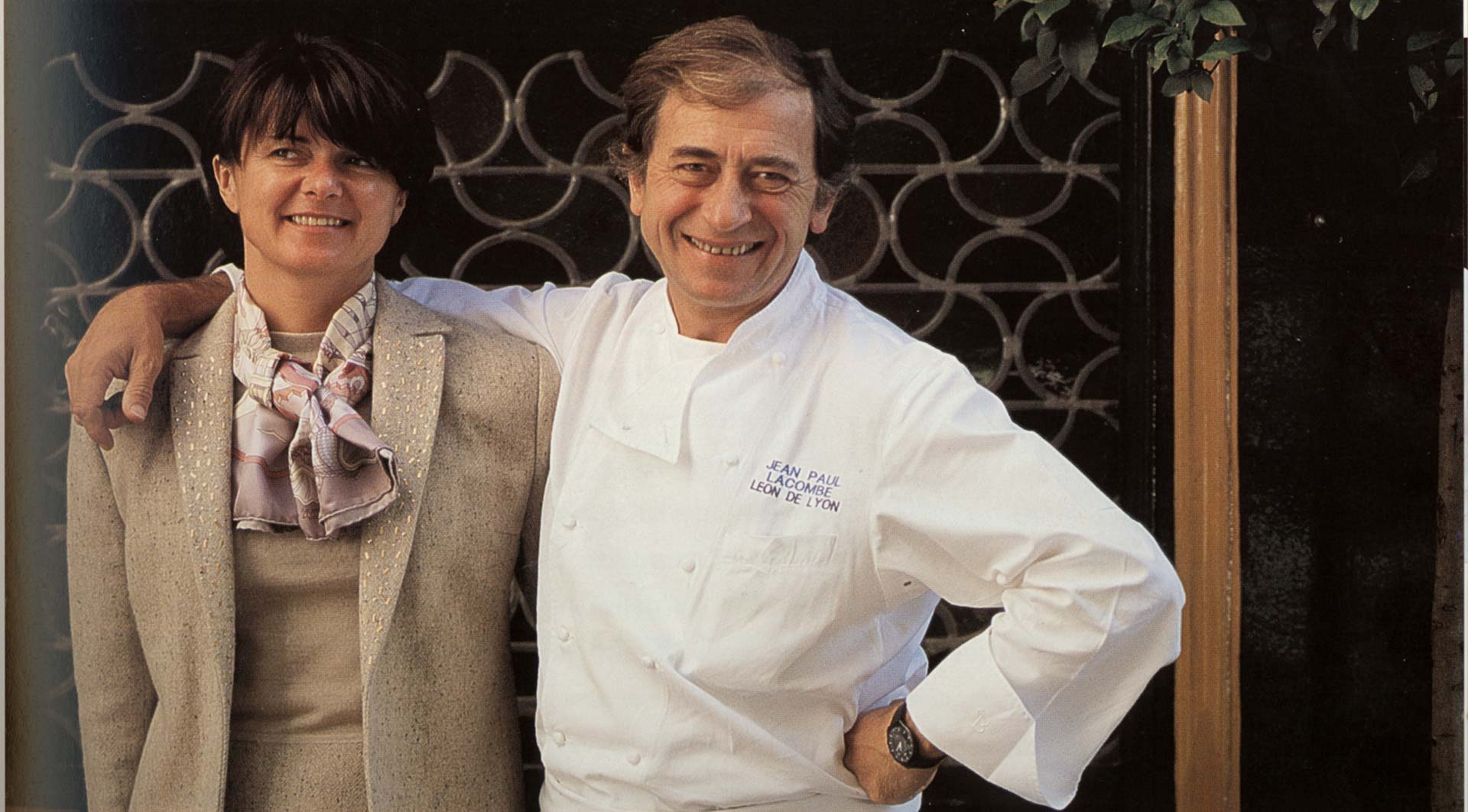 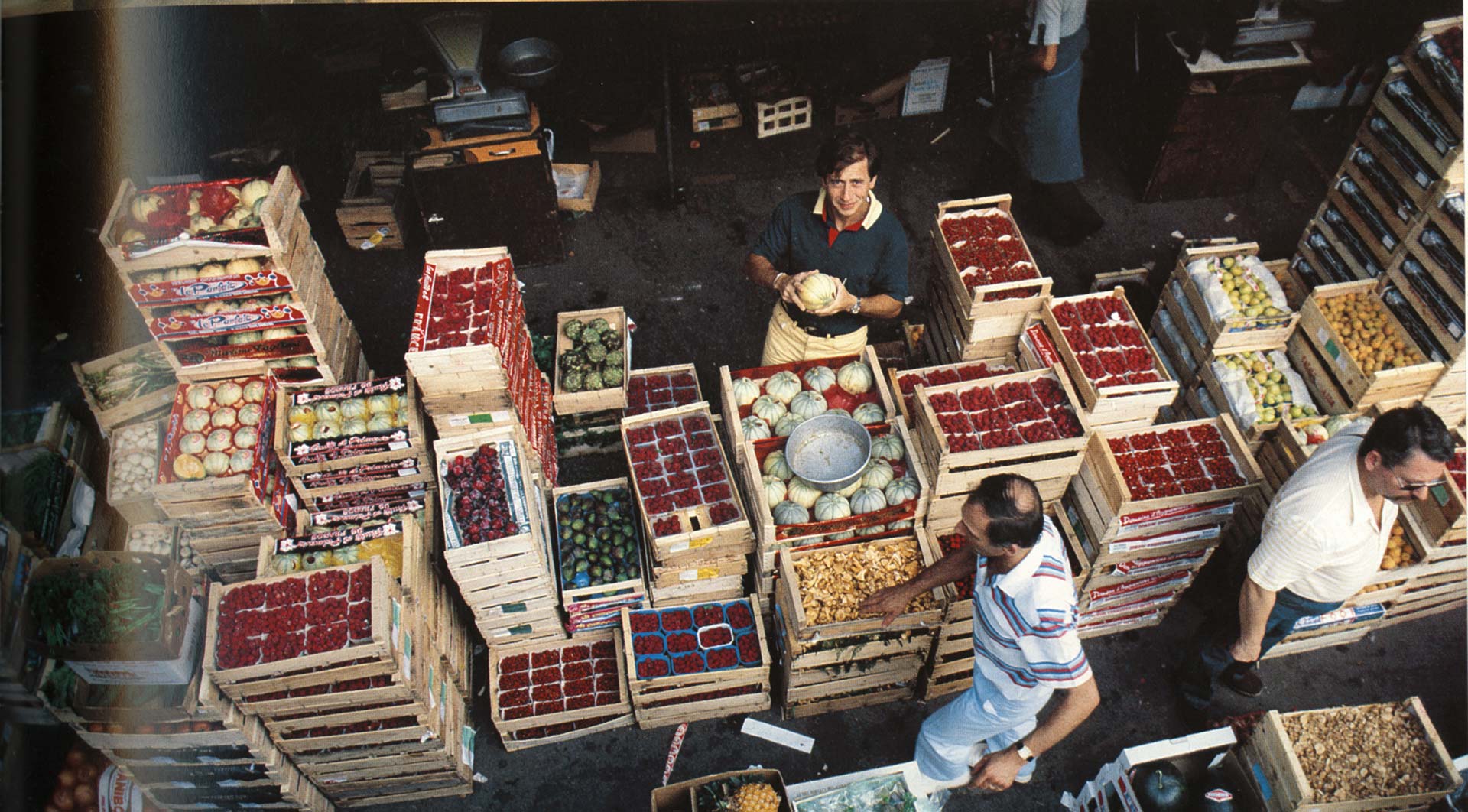 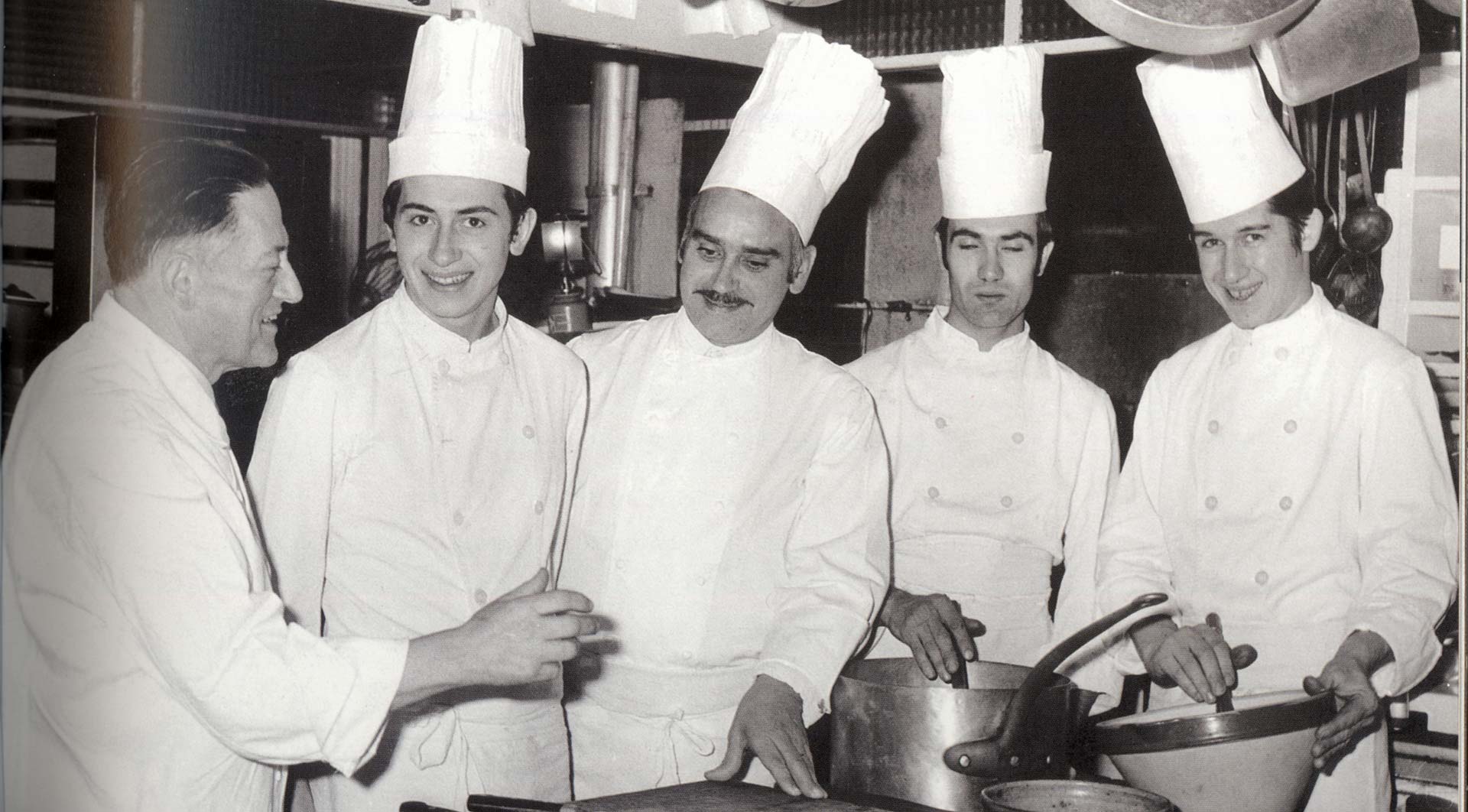 1972: At the age of just 23 years, when he was about to leave for the country of Shakespeare and enjoyed slumming it with his bunch of friends as soon as he left the kitchen of Lasserre, Jean-Paul Lacombe was rushed into the family gourmet property no less mythical, Léon de Lyon.

His father, Paul Lacombe, had just died, leaving behind Gisèle, Jean-Paul, Michèle, and a certain Léon de Lyon, in grief.

The time with buddies, the outings with solex bikes and the happy-go-lucky attitude were replaced by responsibility for his entire family, including around 15 employees of the property.

Instead of betting around by the toss of a coin, he had to make an “adult” choice: take over the family property and leave his kid dreams aside.

Joined by his sister Michèle, who gave up tourism to support him, the Lacombe son was able to rely on further support by really important people: the friends of his father, including Christian Bourillot, Gérard Nandron, and a certain Paul Bocuse.

“There are moments in life which can go either way. The friends of my father, like Paul Bocuse, had all the information which could have prevented them from trusting me, but nonetheless they had confidence. They sent me guests, journalists and were ready to commit their reputation. I did not want to disappoint them.”

The Michelin star gained by his father in 1955 was not part of the inheritance rights, but the determination of young Lacombe was convincing and one year later, the star was confirmed.
We are in 1973 and the Lacombe son has established his first name.

THE BEGINNINGS OF THE BISTROT DE CUISINIERS SPIRIT

After 2 years of living together, Jean-Paul and Léon are already an old couple. They wake up and fall asleep every day in their arms.

The number of guests increases, success comes about, the desire is slightly weaker.
We are in 1974, the Rolling Stones sing “It’s Only Rock’N’Roll”. Jean-Paul Lacombe, the agitator, takes the next step.

Together with a friend, he offers himself a festive interlude, “a pressure relief valve” and opens at rue Mercière very close to rue Pleney, a bistro for friends: Le Bistrot de Lyon.

This street is then occupied by some prostitutes and it is a new face of the street of pleasure that Jean-Paul Lacombe and his friend design with their construction during months. The wealth of details imagined by this passionate of antiques is such that the bistro, albeit new, seems to have been caressed by decades of patina.

20 September 1974: A few hours before the curtain is raised, the Lyon smart set meets in rue Mercière, which is still battered. The kick off for an encounter full of promises is completed.

1974: A HISTORY OF FRIENDS
Success is immediate: from the first evening onwards, in the dining room of 60 covers, 90 meals
are served and the two friends have to send away guests.
Based on its success, the property is growing and increased to 130 covers in 1976. Two years later, Léon de Lyon is awarded its second star and Jean-Paul Lacombe celebrates his 28th birthday.

1984: 10 YEARS ALREADY
In 1984, Bistrot de Lyon stops its existence as a night owl and becomes also diurnal.
“It was a pity that such a nice place was sleeping during the day.” said Jean-Paul Lacombe. Message received; 2 years later Bistrot de Lyon opens its doors seven days a week, inventing in this way perpetual motion.
Changes, but the same frame of mind: that of a Paris brasserie from the beginning of the century with a “bistro” and “Lyon, bourgeois and canaille “cuisine” as appropriately qualified by a Lyon food writer. The “Bistrot de Cuisiniers” spirit was born.

1989: LE PETIT LÉON
After the creation of Le Petit Léon, sort of a laboratory of what Jean-Paul Lacombe is outlining behind the scenes for the big brother, the Bistrot de Cuisiniers spirit is confirmed.
In this property, next to the first one, guests discover a picturesque and amicable cuisine “a restaurant in a quarter, for the people from the quarter”.
The system of menu card with 3 starters, 3 main courses, 3 desserts is launched. An inexhaustible collection of utensils, covers and other curiosities is proudly displayed on the walls.
The “Bistrot de Cuisiniers” brand is launched; the circumstances take care of the rest.

1992: THE FAMILY IS ENLARGED
10 February 1992, after the playground on the peninsula, the Chef expresses himself now in 220 rue Duguesclin, with delight and joy.
The “Bistrot du Palais” joins the coveted little family of Bistrots de Cuisiniers. It is an exotic address for those who have been circulating since 20 years between rue Pleney and rue Mercière, but the spirit is the same as the one initiated in 1974: a Paris brasserie, opening up to the spectacle of the streets and conducive to pleasure.
The collection of chocolate moulds, asparagus plates or enamel plaques as could be seen at the caterers in former times, establishes Bistrot du Palais definitively as the “Bistrot of the Tastebuds” like its big brothers Léon de Lyon and Bistrot de Lyon.
The proximity to the court building is of course an asset for this bistro which refers to it already through its label.
During the night, the façade is highlighted like the figurehead of a cruise ship. The tramway across from it invites to other voyages.
Bistrot du Palais seems to be isolated in the silence of the left embankment.
One wants to stop as if the conviviality of the place provided the certainty that one could escape the loneliness of big cities.

1996: MORE THAN A BRAND, A GROUP
More than a concept, Bistrots de Cuisiniers is a genuine brand. Every property applies actually the same formula: a regional cuisine with simple products but perfectly prepared, a menu card which changes daily to allow for optimised sourcing and a clever management of stocks, an unrivalled quality price ratio and an original decor, which injects this supplement of soul into all the properties.
The formula works and the Bistrots de Cuisiniers are 9 in 2003.
Loyalty: this is the buzzword of the moment. A term which sounds good, like the idea of rewarding the guests of Bistrots de Cuisiniers by inviting them to a culinary celebration at Léon de Lyon. “Feel at home, wanting to come back regularly, this has always been our intention and it is through this card that we show our guests all our desire to see them leave with regret and come back with pleasure.” declares Jean-Paul Lacombe.
At the same time, other players are interested in this innovative concept, which offers a creative, inspired and quality driven cuisine for only a few euros.
The brand is exported and together with it, its unique signature and soul.
A Group is born.

THURSDAY 8 MARCH 2007 – 10.30 am
In a crowded room, Jean-Paul Lacombe holds a press conference. The iconic Chef of the City of Lights pays homage to his friend Léon de Lyon, who has been up and running since 1904 and next to him since 1972.
The journalists contemplate the DVD which is handed out to them and whilst the conference comes to a close, Jean-Paul Lacombe pronounces these few words which will cause a lot of noise.
“Well, I have invited you to this conference today to announce that Léon de Lyon will have its last service on 31 December 2007.
After 35 years of culinary arts, 27 years with 2 Michelin stars, 25 years of Relais & Châteaux membership, 15 years of Tradition et Qualité membership without forgetting Les Grandes Tables du Monde, I am happy to take off my chef’s hat and devote myself to other projects.
My wife and I have started a little family adventure which bears the gentle name of “Bistrots de Cuisiniers” that has today 10 restaurants apart from our dear Léon.
I am fully driven today by proposing an inspired cuisine, in authentic places at affordable prices.
Léon will have its last service with a lot of pomp on 31 December 2007 and will offer itself a second youth by becoming the youngest Bistrot de Cuisiniers!”
COMEBACK OF LÉON
After 6 weeks of lifting, the youngest Bistrot de Cuisiniers is back on stage.
The brasserie is magnificent. This Léon is just as authentic as it is unabashed.
“It was only natural that Léon de Lyon, which took everything from me but also gave me everything, which initiated my first bistro of “friends” rue Mercière, should exhibit its superb character to the highest number, the most affordable prices and a more accessible ambience,” reveals Jean-Paul Lacombe.
A crazy bet but successful for what is referred to as the precursor of Bistrots de Grands Chefs.
Léon de Lyon, the oldest in the family and the youngest Bistrot de Cuisiniers

On the occasion of the 100th anniversary of Léon de Lyon, a property created in 1904, the first book with 100 years of Lyon cuisine was published.
Jean-Paul Lacombe offers us 60 new recipes jealously kept secret so far. In these pages you find the quintessence of Lyon culinary arts, transcended by the creativity of a great Chef.
From the Lyon bouchon of his father Paul Lacombe to the private dinner of 9 heads of state at the 1996 G7, as a headline in the New York Times, it is the itinerary of an exceptional Chef which should be read …
This book is the result of a history of friendship between a chef, Jean-Paul Lacombe, a creator, Alain Vavro and a photographer, Jean-François Mallet, who wanted to sign together a reference book. 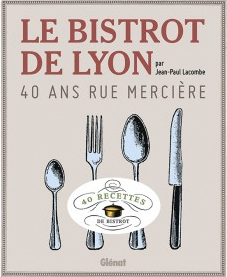 Recipes easy to prepare, a nice history of culinary arts, a decor to make antique hunters jealous, photos which make you want to rush to rue Mercière, this book is an invitation to discover Lyon and the bistro cuisine at their best.
Le Bistrot de Lyon in rue Mercière is an unmissable address both for the Lyon people and for the visitors to the capital of gastronomy.
In 1974, young Jean-Paul Lacombe, already behind the stove of the renowned Léon de Lyon, invented the concept of “bistrot de chef” by opening this second property only a few steps from the starred restaurant.
On the same occasion he gave its dignity back to an ill-famed district where Bistrot de Lyon was multiplied in such a way that rue Mercière is today the “restaurant street”.
But with its exceptional art décor, Bistrot de Lyon remains unrivalled.
It is part of the cultural heritage of the city and of Lyon cuisine and embodies the perfect bistro concept although it is only 40 years old. 40 years of effervescence and creativity, in the dining room and on the plate, which are illustrated by 40 recipes and even more anecdotes and photos making up this book.
To order and receive the book by mail:
Tel. : 04 78 38 47 47 – Price EUR 29.00
Order online